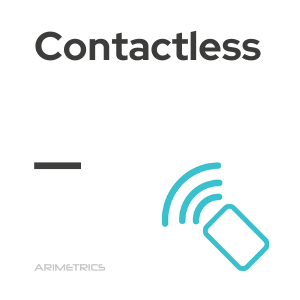 Contactless is the term applied to technology that allows ‘contactless’ operations to be carried out using a communication system called NFC (‘near field communications’). It is mainly used with credit cards, but there are more and more plastic devices that support this technology, such as mobile phones, smart watches or key chains.

Contactless systems have been developed mainly for card payments and already account for 57% of their volume in Spain (according to Mastercard data). However, it is also a frequent method in access controls to buildings, public transport, etc.

For the wireless system to work properly, there must be at least two devices that have NFC technology,usually a card and a terminal. This technology consists of a very thin antenna inserted inside the card and that is not visible to the naked eye. It is detected by pos terminals (or dataphones) at the time of payment. The only requirement is that both are a few centimeters apart (between 3 and 5), without the need for direct contact.

They allow you to make payments in shops and restaurants without marking the PIN code, so their security generates some doubts. In Spain, the maximum amount that is allowed to be paid without a security number is only 20 euros, although the user can modify this amount.

Cards that have a contactless system are identified with a symbol similar to waves. The fact that they have this technology does not mean that they cannot be used using the traditional magnetic stripe if necessary.

The speed. It is, without a doubt, the main advantage of this payment system. The ability to complete a transaction in just a few seconds streamlines in-store operations and saves the user time.

Comfort. More and more users are opting not to carry credit or debit cards and prefer to use, for example, their smartwatch. This is especially useful when traveling abroad.

Safety. The possibility of an unwanted payment being made when passing near an active POS or even having small amounts stolen from us is a fear that assaults many contactless users. However, and despite urban legends, this is unlikely to happen, since the following assumptions should be made: that the POS was connected and covered; that is registered and verified; that the dataphone is about 3 seconds from the card; and, finally, to remain in that position between one and three seconds.

How to protect your contactless card

To avoid the risk of theft through contactless payment cards, the user can implement a series of tips: