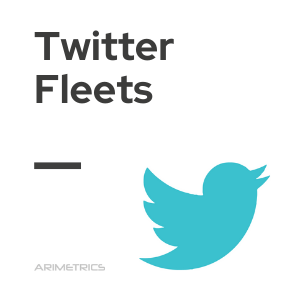 Twitter Fleets are ephemeral posts, which disappear 24 hours after their publication, on the microblogging social network Twitter.

According to the word of the Twitter developers, with Fleets you can share momentary or transitory ideas or reflections.

Twitter Fleets are the alternative to Instagram Stories, Facebook and, more recently, LinkedIn. As in these social networks, they can only be published from mobile devices, both on IOs and Android.

Ephemeral content has been demonstrating for quite some time that it is the one that generates the most engagement in Social Media strategies. As all social networks already have this functionality integrated, Twitter has wanted to join fleets and rename the term in its own way, to differentiate itself from the rest.

Twitter Fleets is an easy-to-use functionality since it looks a lot like the Stories of other already consolidated social networks.

With Twitter Fleets you can create content with photos from the mobile gallery, videos or capture photos in the moment, as is done in other social networks. You can also add text and customize with the default fonts in the tool and change the background color to taste.

Unlike tweets that have been posted so far, Fleets doesn’t allow you to retweet, like, or reply publicly. As in the rest of social networks when commenting on a Fleet the user does it in private.

However, you can share Tweets already published from other users, as it happens in the rest of the RRSS platforms. This way you can more easily share the content on Twitter and get more engagement.

In July 2021, Twitter decided to override the functionality of Twitter Fleets due to its low acceptance among users.