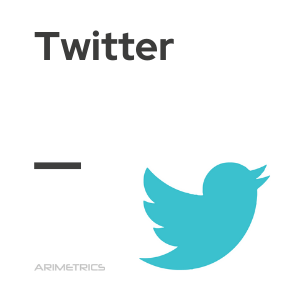 Twitter is a free social messaging tool that allows users to stay connected through short text messages of up to 140 characters in length. The social network Twitter is based on answering the question “What are you doing?”. Thoughts, observations, and comings and goings during the day are then posted.

The update of these messages is published on the user’s Twitter profile page through SMS text messages, the Twitter website, instant messaging, RSS, email or through other applications and social sites, such as Facebook.

Registered users on Twitter can read and post tweets, but those who are not registered can only read them.

The service handles 1.6 million search queries per day. In 2013, Twitter was one of the ten most visited websites and has been described as “the SMS of the Internet “. In May 2019 Twitter had more than 126 million users.

Twitter is easily identifiable internationally by its blue bird logo, which is known as “Larry theBird“, in honor of basketball player Larry Bird. This logo has evolved over the years, simplifying its design every time it was moved to a new version. This bird is a mountain tile, native to western North America.

Regarding the typography used, it corresponds to the Pico Black font.

Users can also group messages by topic by using hashtags, which are words or phrases preceded by the “#” sign. Similarly, the ” @ ” sign followed by a username is used to mention or respond to other users. All this always in 140 characters.

There is also the concept of “trending topic”, a word, phrase or topic that is mentioned at a higher rate than others and becomes popular with users over a period of time.